King Arthur: Knight's Tale follows the best traditions of turn-based tactical games and RPGs, but there is a new, innovative addition as well: the Morality Chart. Today we dive deep into this awesome feature which will define your playstyle and the characteristics of your regency!

This unique system will serve as indicator how your subordinates and enemies will judge you during the game. One axis of the chart represents Rightfulness and Tyranny, the other represents Old Faith and Christianity.

As you venture into new missions, you will be facing moral decisions which will move these values on the chart. Everything you do will be reflected here: it will show you exactly what kind of king you are.

Let's say there's a plague! What would you do? Sure, you can burn down every local building to stop its spread… but you can send in a healer as well. Riskier, but more humane! Or, let's say you happen upon a group of bandits harassing a merchant. You can deal with the robbers and let the merchant determine your reward, or... if you're in need, you can just take everything. So how do you decide? Tough questions! 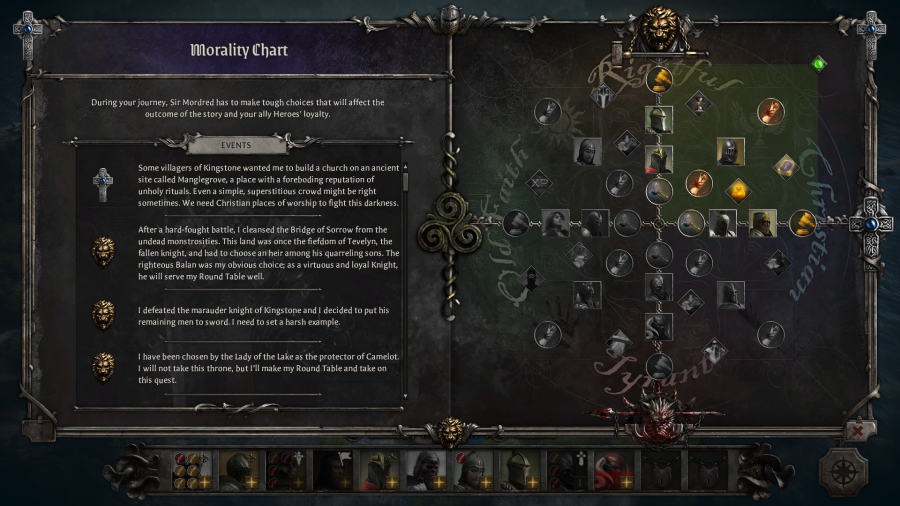 The Morality Chart isn’t just a fancy display, it has deeper implications in the game mechanics as well, by unlocking:

The loyalty of your heroes can be influenced by your standing on the Morality Chart (well, among other things). Some of your heroes’ values might stand in stark contrast to the values you represent (take both axes into consideration!), in this case, don’t always count on their support and loyalty.

In short, the Morality Chart is a versatile and central mechanic that can affect other game mechanics, determine the heroes you can hire, influence the cost and assembly speed of certain buildings, even the time and money spent on recovery.

As you play, always be mindful about the most important question at the heart of Knight’s Tale: what kind of king do you want to be?

Get King Arthur Knight's Tale at release on April 26 or head to Steam and get the Early Access version now - your moral choice.