Our newest update on PC includes an in-game store for Warhammer 40,000: Inquisitor - Martyr, among other fixes. You will be able to spend your Fate points here, allowing to purchase certain DLCs. 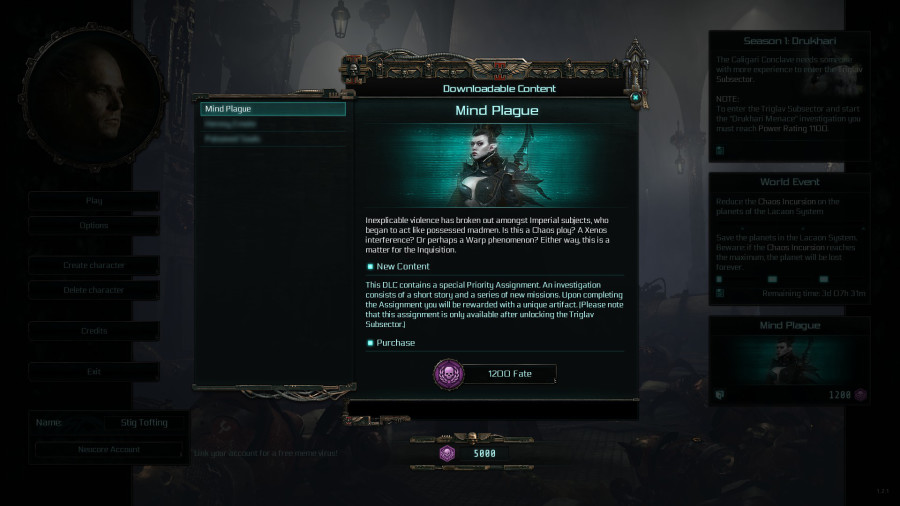 Some basic things you should know about this store:

As of now, this is just the implementation of the feature, so you can't buy a lot of things, but in time, the stock will grow with several types of DLCs, such as Priority Assignments, Emotes, and more.

Again, this does not require you to spend any real money, as Fate can be farmed by pretty much just by playing the game, completing missions, especially Ordos Directives, selling high-tier items, gaining System Influence. Also, being on Weekly Glory charts is a good way to earn them.

Our first DLC is a Priority Assignment called Mind Plague. Available after unlocking the Triglav Subsector, this Assignment consist of a short story and a series of new missions. Upon completing the Assignment you will be rewarded with a unique cosmetic item.

Inexplicable violence has broken out amongst Imperial subjects, who began to act like possessed madmen.Is this a Chaos ploy? A Xenos interference? Or perhaps a Warp phenomenon? Either way, this is a matter for the Inquisition.

We also took this opportunity to include a few more fixes, read here for the full patch log! The 1.2.1 update on Steam is available after a brief maintenance, which starts at 4pm CEST.

We hope you like the new update, let us know in the comments!

This post was edited 3 years 121 days ago by Tender
Comment
Store Page
Share
previous post back to community page next post
26 comments
Featured comment
Newest Oldest Best
Save This Order
Set this current order state as My default.
Order Save Options
Inquisitor - Martyr: New DLC & In-game Store
Your Thoughts? Please login to place your opinion. Not a member yet? Register here and now!
1
Staff Member

Godlike
Marcopolocs
61 5189
3 years 116 days ago
+0
0
LokhNaar
Please note that the Outpost DLC is not contained in the Season pass because it was initially a pre-order bonus. Please contact Microsoft's support since only they can assist you in the matter related to their store!
1
LokhNaar
0 1
3 years 116 days ago
+0
0
Brother Kundari
Any tips how to get that new dlc?Have season pass and i cant find any new content.Microsoft store its not  working at  the moment so dont now  how to check that.
1
Ursurper
0 10
3 years 117 days ago
+1
1

I thought a few Weeks ago as i saw how much Points you have to earn and spend for some Missions in the Endgame that i woudlnt be surprised if there come real Money Purchases,cause the amount you need ,(500 for Nemesis?) seems pretty High.

I mean the Green Endgame currency.

I hope there comes no Real Money Store Stuff into this Game,cause it seems to be made for this,atleast with some thoughts about it in Mind.
To always see Ads to Purchase stuff etc would break the Game for me,and i already payed 100 Euros for a Game that was really Rough at release.
I already felt a bit F* as i saw that theres a new Mission for about 5 Euros and the Servitor that isnt included in this Heavily Expensive Edition.
Was the First and last Time i bought such an Edition thing.

I like the Game how it is,i even dig the huge Grinding you have to do on always the same Maps cause Fighting is fun in the Game.
But im on the Border to feel robbed.

To me its a really good Hack'n Slay and the best Alternate to Diablo 2 aside of Path of Exile,i just hope the Direction doesnt get influenced by 2 much greed and more by Heart.

Yeah, not on PS 4 currently.
And whats up with the Charybdis outpost mission?

I bought a Season Pass but the PS 4 Store indicates that i have to bay about 5 EUR for it.
Is this real, or do i only have to wait?
If i have to pay, than what was the Season Pass for?

If I had to pay $10 for the exact same content, I would actually complain. A lot at that too.

If anyone knows though - I'd like to know how this effects the season pass (if there is going to be a pc one) or a one off.

due to the regional differences there were some delay in the deploying of the newest patch for Xbox. As we checked it works now in every region properly. We are sorry for the inconvenience this issue caused!

@BRAGG‍ The 1.2.1 version was meant for PC and the 1.0.1.5 was meant for Xbox! The console version of Inquisitor - Martyr does not contain the Season1 just yet! Please read the recent changes on Xbox here:
https://neocoregames.com/en/community/hub/xbox-update-for-inquisitor-martyr-v1015-sept-27

I think developers need to give more time. And do not remind about the road map. They got a very cool game on the universe of 40 000. This has not happened for many years.Forgive me if my anguish is terrible))