"For the Cabal" PS4 trophy bugged?

Hi, I'm playing Martyr for couple of months now. I have joined cabal couple of weeks ago and the cabal is active (lvl 9 ATM) doing 4-5 cabal directives each week. However the trophy "For the Cabal" (Complete 10 Cabal directives with your Cabal) doesn't pop-up for me.

I have contributed to multiple directives myself if that makes any difference.

Note: To get "Brother in Arms" (Join a Cabal) trophy I had to make my own Cabal as it didn't count just joining any Cabal.
Would it be something similar here? Do I need to create my own Cabal and then do 10 directives? If so that's really poor design especially with abysmal player base on PS4 where matchmaking for a game can take few hours.

Comment
Store Page
Share
previous post back to community page next post
16 comments
Featured comment
Newest Oldest Best
Save This Order
Set this current order state as My default.
Order Save Options
"For the Cabal" PS4 trophy bugged?
Your Thoughts? Please login to place your opinion. Not a member yet? Register here and now!
1
Staff Member 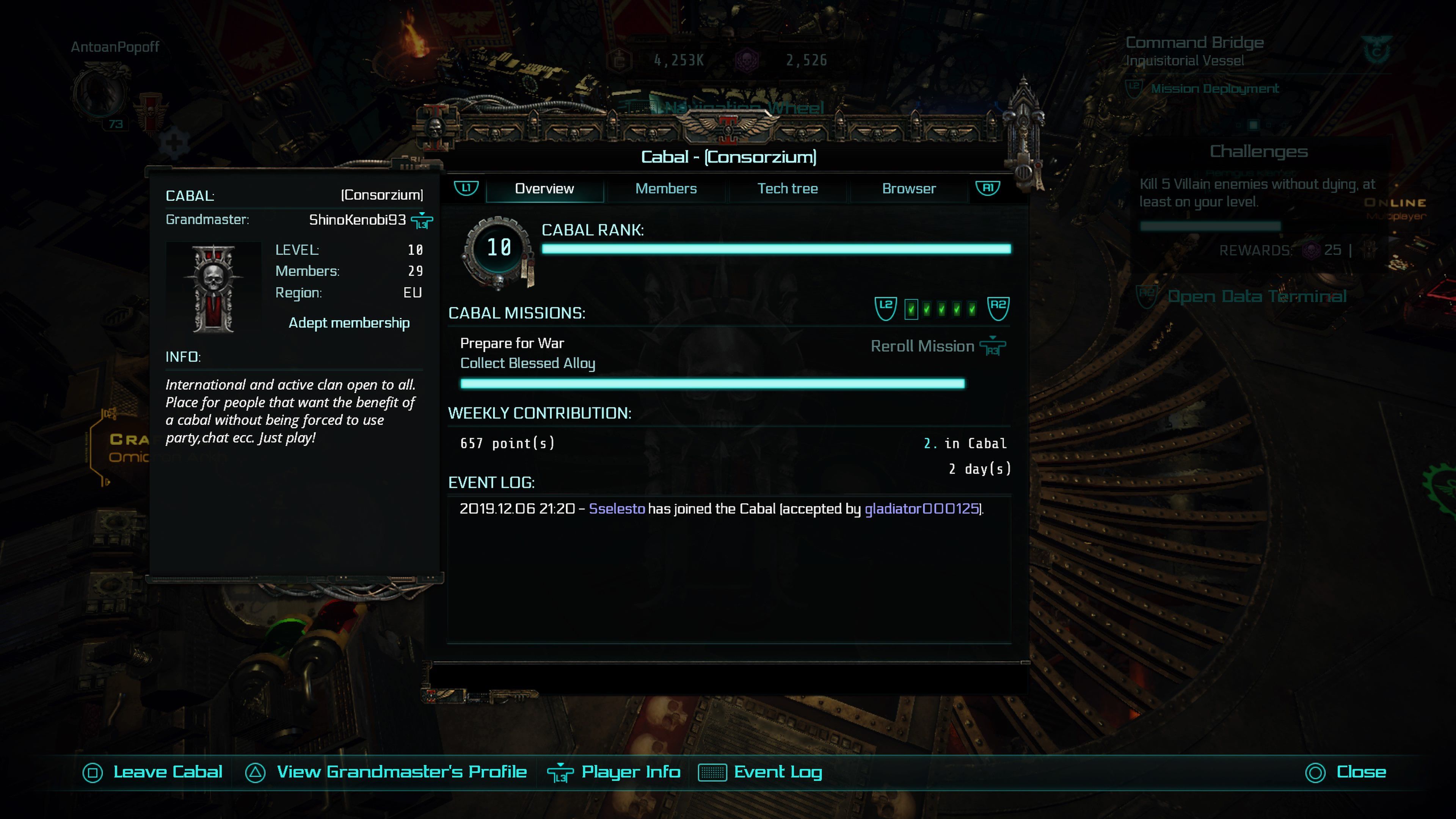 Not only that for 3 weeks I've been farming and donating my resources for the sake of completing this trophy fast and doing 5 directives (EACH WEEK FOR THE PAST 3 WEEKS) and the trophy did not unlock, but also the trophy for joining a Cabal has not unlocked....

1
Rakshah
0 3
206 days ago
+2
2
I finally received the trophy. I started creating and deleting cabals and only did the fast missions. After 2 more i got the platinum trophy. Hope this helps somebody. Ty for your help anyways :)
1
Staff Member

Irie and I followed your advice. Unfortunately the trophy did not unlock for either of us. Do you know why the problem occurs and what could be done to unlock the trophy?

Thank you in advance

could you please try unlocking the trophy by leaving your Cabal temporarily and ask the Cabal leader to invite you? That trophy should pop up then!

Unfortunately i have the same problem with that trophy.

I have been in a cabal for weeks and we have done 3-5 missions every week. still, the trophy doesn't pop up for me.

Have been in a cabal for more than 2 months and this is my last trophy. TY!

Thank you for help!

I got a trophy.

Godlike
Marcopolocs
12 2958
234 days ago
+0
0
ProEvoFan
Kérlek próbáljátok meg úgy, hogy a Klán vezér hív meg téged.
1
Sevens
7 18
237 days ago
+1
1
Made my own Cabal, got both trophies. Did 9 challenges by myself, 1 one mostly by myself. Worked with the latest PS4 patch.
1
ProEvoFan
0 2
237 days ago
+0
0
Marcopolocs
Sajnos nekem sem adta be a trófeát ps4en.Jelentkezés után csatlakoztam.
1
JSS
0 2
240 days ago
+1
1
Marcopolocs
I believe I sent a request to join it originally, I'll give what you said a go and try leaving and being invited back
1
Staff Member

May we ask how you joined your Cabal? By inviting or you applied? Please leave your Cabal and try joining the other way too.

1
JSS
0 2
241 days ago
+0
0
Marcopolocs
I seem to have the same problem, been in a high level cabal for weeks contributing and still it doesnt want to pop.. Kinda annoying as I only have a few trophies left to grab

Godlike
Marcopolocs
12 2958
243 days ago
+1
1
Could you please provide your PSN to us? We will look into the case on your account.