Starting today, the Caligari Sector will have an unique bonus rotating weekly. With each freshly activated buff, players will gain an advantage in different activities. Weekly Buffs reset on Mondays with Glory.

The full list of the weekly buffs can be found here.

The Caligari Conclave has identified eight enemies of the Imperium as primary targets in need of immediate elimination. In His name they shall be obliterated from existence.

Enemies of the Imperium can now spawn instead of Villains during Missions. By defeating them, players are rewarded Fate, Credits, and gear - however, if all eight Targets are eliminated, the rewards are much more valuable - gather Favour, Loot Chests, Psalms, and Consumables! 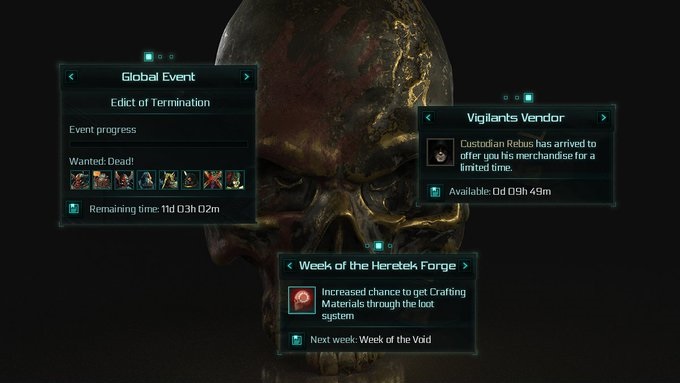 Custodian Rebus is in possession of valuable artifacts of time past, as well as powerful relics to help fighting against the enemies of the Imperium. However, he's willing to trade them for the right price. By completing various existing and upcoming Events, players are rewarded Favour that can be turned in at the Custodian in exchange for various cosmetics, consumables, auras, summons, and more!

This post was edited 2 years 109 days ago by Megapull
Comment
Store Page
Share
previous post back to community page next post
17 comments
Featured comment
Newest Oldest Best
Save This Order
Set this current order state as My default.
Order Save Options
Content Update for Inquisitor - 2.2.0 - Nov 19
Your Thoughts? Please login to place your opinion. Not a member yet? Register here and now!
1
NinjaKnickers
2 14
2 years 111 days ago
+0
0
Marcopolocs
I never asked about Prophecy?? I asked when PS4 users will get patch 2.2.0 and when will the game actually be playable without horrific screen tearing and huge FPS drops.

How about you have a dedicated pinned thread for PS4 support?

we will have a stream next week where we will share some great news regarding Inquisitor - Prophecy's release. We will spread the exact day of when we will be online on our various platforms on the coming days so stay tuned!

The Through the Fire and Flames mission is still crashing for me, I've sent in 6 or so crash reports to Sony about it

Godlike
Marcopolocs
67 5272
2 years 167 days ago
+0
0
@BROTHER KUNDARI‍ we are planning to release a new event near the end of January which will also reward the players with Favour. Beside that a new option to get more Favours (more details will come later) will also get implemented near this period (in the end of January or in February). This is all I can confirm for now.
1
Brother Kundari
19 552
2 years 168 days ago
+0
0
Ok, I see now in the Roadmap page, upcoming Global Event: Legends.

Does this mean we are not able to get anything Favour related PTS until THIS release?

Can some1 please confirm/unconfirm this and my last post?!.

1
Brother Kundari
19 552
2 years 172 days ago
+1
1
I was suddenly thinking of this Favour Points system. I understood it as back then as it was ONLY possible to get 10 Points of Favour. And you could ONLY USE points on as many Cosmetics you could get for 10 Points. Now is the day after end of Bounty Event, and the Inquisitor Vendor having these items is still in the Agartha Sector.

Was there possible to get MORE points where I have completely missed out on here DURING the event, or was 10 Points that´s it and done with it?!

Or will there be more Events coming so it can be more Points available, or a system where it is possible to at least grind for Favour? I was able to buy meself one single item (yes, it was a very nice Command deck item) from that Vendor. I wish to be able to purchase more.

Understood, it's all on constructs.

How I want to expand the arsenal.

It would be better if we got a blueprint from a merchant. Too much chance is bad. And the description of the objects themselves, it’s clear that I’ll get it, but I would like specifics with game information.

Does this patch fix the "can't leave system" travel bug and the "can't progress main mission bug - Saving Caius Thorn", unfortunately i've been stuck with both.  The dev team attempted to fix my save, but only worked for about an hour then broke again.  Thanks!!

Thanks for the update.

About this one "The Puritan perk now gives 4 energy shield/puritan points that regenerates faster than most energy shields. Works with shield related enchants. Also, while you have a shield active (any shield) players get a 25% Heat Damage Bonus", is it possible to remove the bubble around our character for something more subtle and almost invisible? I was using this perk before but no more because most of the time, I only see a big bubble with my blurry assassin inside (even in 4K with all graphic setting to max) and avoided all Shields because of this bubble that has a too strong effect/shader.

However, I'm experiencing a bug that wasn't there prior to the path: on pc using a controller the character stands still using the whirlwind attack on the arc blades. Using the directional stick doesn't do anything and any other controller key doesn't move the character while holding the whirlwind attack, either. After releasing the key, the char moves for a split second and then stands still while the cd then is active.

Will this patch come out on PS4 as well?