So we got a new unique Inoculator in the Skull event. Overall nothing really special, i wish i could put sockets in or that it would come with 3 sockets at base level, but because its level 10 i can never socket it.. 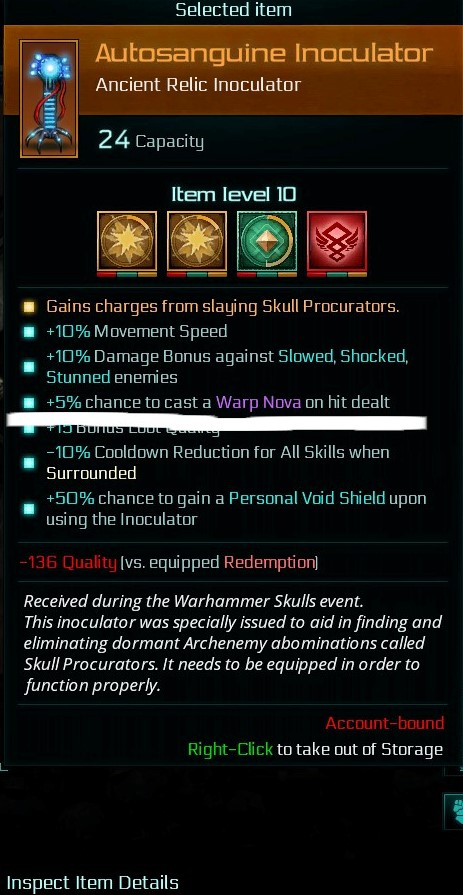 a few months ago i made posts here and in the official reddit that i wanna see something like that, some new aura/aoe effect, besides the socketed heat aura and shock aura.

I think this effect is really nice and interesting, the 5% are really low though, so i hope this enchant comes into the base game enchant roster. So we can have like 4-5 items or more with this enchant rolled and get over 20% chance.

As i said before we sorely need more AoE aura/effects to apply vulnerabilities and debuffs better. And giving us easier ways to stack tokens. This would be crucial mostly for ranged and single target builds, they lack behind a lot, and its very tempting to slot every single time heat aura because of the benefits.

I would recommend one change though and that is , dont spawn the Warp Nova around our character, make it spawn around the enemy you are attacking, this would benefit ranged builds greatly, because now its only useful for melee builds (or going in melee range with ranged builds), melee builds are already much stronger and have already melee auras like heat and shock.

So I hope with this post it goes into consideration to give us this enchant permanently into the base roster.

1. These "Skull Procurators" will not be around once the event ends. Does that mean the Relic tier enchantment of the Autosanguine Inoculator will become absolutely useless?

2. The Level 10 of the Autosanguine Inoculator means it cannot be socketed. Is that an  oversight, or by design? Because, if by design, the only enchantment worth the bother is the Warp Nova on Hit one.