Updates to W40K: Inquisitor - Martyr have been released. The updates will be applied automatically when your Steam client (in on-line mode) is restarted. It is also recommended to delete any launch parameters you previously had (you can re-add them if they help again, but it is safer to assume everything works best without them). Please also note that the backend server might take up to 30 minutes to transfer to the newest update, during which time login will not be possible.

With this update, we have issued an aforementioned character wipe due to the massive changes to the skill system and game balance, not to mention itemization. Hopefully the new gameplay experience will prove to be a lot better :)

The game is divided into large chunks of difficulties - subsectors. Every subsector will represent a player Tier. One Tier will include 10-20 power levels to gain. Arriving at the end of a tier will mean maxing out the current content and gathering "end-game" gear - until you arrive at the next tier, the next subsector, of course. Currently, the first Tier is available.

This is where the new item rarity,currently named Relics, will come into play, with more powerful, unique enchants, special skill combinations - and badass looks. Relics will be basically the best-in-slot items for the tier, allowing players to max out the content available for them in that subsector (endless missions, for example), and pass through to the next Tier, opening up a new Subsector. 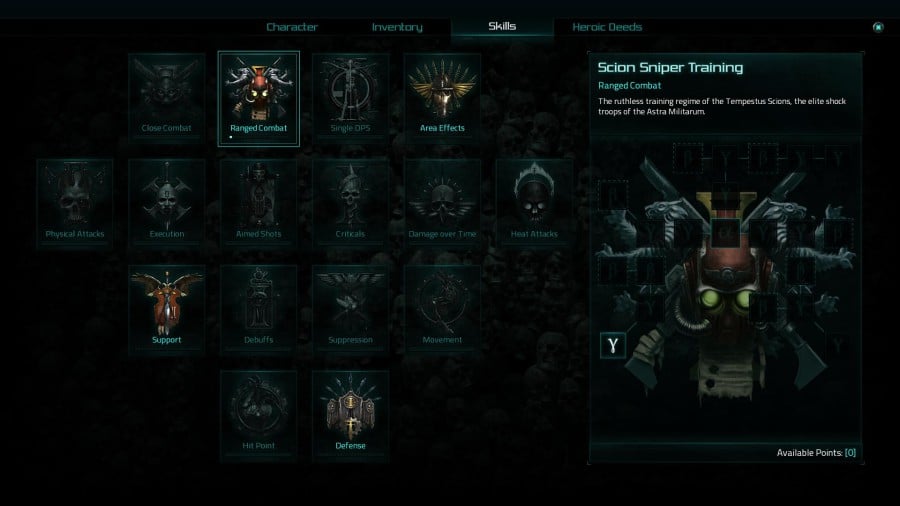 Existing map settings such as the Imperial Indoors setting will receive sub-settings continuously. The first instalment is the Nurgle Infested version.

Among the existing ones, players may encounter the following scripts during missions:

Newest Oldest Best
Save This Order
Set this current order state as My default.
Order Save Options
INQUISITOR - MARTYR: CONTENT PATCH V0.4.0
Your Thoughts? Please login to place your opinion. Not a member yet? Register here and now!
1
Airsick Hydra
122 709
5 years 202 days ago
+1
1
ElizLestrad

Rules for ARPG's kinda dictate enemies can't all be small minions, you need variety on a single map from small to large to larger to boss like. For that reason marines have to be included from the start. Try and name a single ARPG that has nothing but standard man sized enemies till "end game" :D

Are we playing the same game ? I have my assassin to level 4 after only 3 missions ? Methinks it's you, not the game.

And still no performance fixes, all this content is totally useless for me untill they fix the engine

While there are finally noticeable changes to the balancing, it still has a long way to go.  It really is hard for me to believe that this is the same company that gave us Van Hellsing.  Right now, the biggest problem is the mob sizes and the over reliance on special enemies.  They are hardly special if they're in every single mob.  Admittedly though, Van Hellsing had this same problem with mob sizes, but it worked better because you had Katrina, and she did most of the work for you (it seemed).

Yet it is clear from both these games that the devs have yet to figure out how to balance their games.  Chaos Marines should be late game enemies, not something a novitiate would encounter on their first mission.

These guys seriously need to sit down with Diablo and see how a AAA company scales a game from low to high level and from solo to a full group (whatever number that might be).  Because right now, as far as solo is concerned, assault gunner is the only viable class and assassin is still completely unplayable.

That my friend is the best excuse ever :D

Thanks ..was so hyped i didnt read all of it

" With this update, we have issued an aforementioned character wipe due to the massive changes to the skill system and game balance, not to mention itemization. Hopefully the new gameplay experience will prove to be a lot better :) "

Maybe they have to make it bold and pink next time to make it stand out even more! lol :D - The friends list wipe etc just comes with them resetting all information. It's normal.

Complete Character Wipe? even Cabal and friend list...or am i doing smth wrong?

Yep, i also was stuck in the reward screen but by clicking in the middle it advanced. Great update even with those minor bugs.

same problem here.. if i restart the game i m still stuck in the mission complete screen without the ability to click the continue button ..

Last time I played was with the performance optimasion. There it was very well working with "very high" graphics. Now I have long loading screens again and needed to reduce to "low". Is it just my pc whats dieing or can it be that that patch made something bad with performance?

Keep an eye on the forums buddy, i know there is a lot to read through - but we have known for 4 months that there would be 200+ skill points, 15-20 skill trees and 50+ perks :D - Trouble is when they respond to threads it tends to get lost in the archives of the forum xD - They certainly do listen though, and make changes where they can.

i cant find the edit button or mybe i am just blind sorry for having 2 pose but keep up the good work if  the Development team keep hearing our TOT  and comment i just might buy the $300 founder pack just to support and show how much i appriciate what this team are doing. Thank you for making a great game i just might cry cause of how happy i am that i found a great game with a good team working on it.

Nice thank you for listing to me. you guys rock

just click the middle of the screen when that happens. Its just that there is a missing icon to click.

hmmm...first bug, finished the first mission, continue button wont get active, had to alt-f4...also, the direction stucks more than before, at least it felt so. often the char keeps running for a while before stopping, even if i keep my fingers of the keys. but it seems to happen when moving and shooting. only moving seems normal. only shooting...dont move much :)

Oh my lord, I love you guys. This looks amazing ! Praise the Emperor !!

Another good day to be an imperial citizen. Three meals a day and a new patch to play.

This looks to be an amazing update huge Kudos to the whole team.