edit: trying to tag a dev/community manager as this now impacts my seasonal character as well.
@MARCOPOLOCS‍

My apologies if this has been posted before, but a search didn't come up with anything related I could find.
Also, I've been away from the game for a while so maybe some mechanics changed that I'm unaware of but the behaviour of the Inoculator I'm experiencing now, seems odd and this has only recently happened for the first time.

I noticed a strange behaviour when using the Inoculator during a Void Crusade mission.
When checking it out, I noticed that the loadout is not how I set it to be.
After further investigation, it seems the Inoculator loadout changes by itself between missions.

Here is a screenshot of my incolulator loadout during a mission. 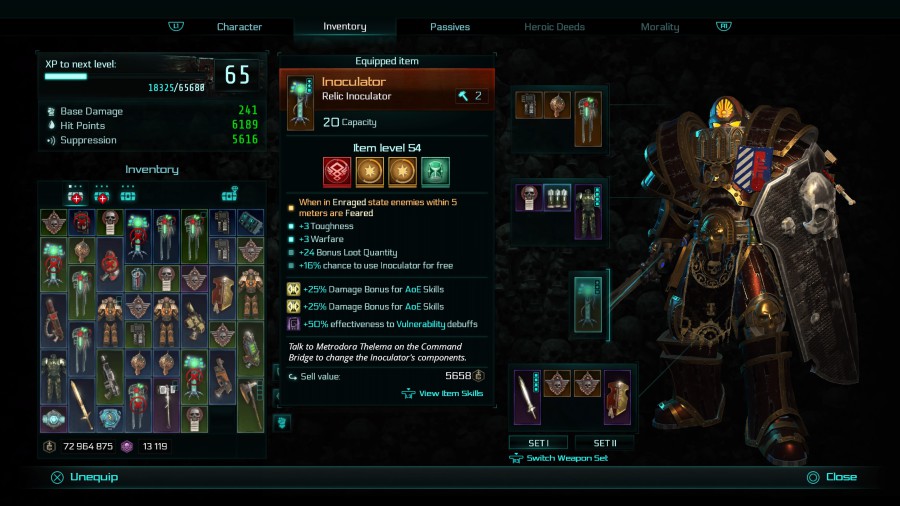 Below is a screenshot immediately after that mission when returning to base (literally 2 minutes after the previous screenshot).
That same equipped Inoculator now has a different loadout. The green one is gone and 1 orange one is gone while they're replaced by extra red ones.
This behaviour makes it extremely difficult as I need healing as well as the added damage from stimm but sometimes I get only yellows or greens 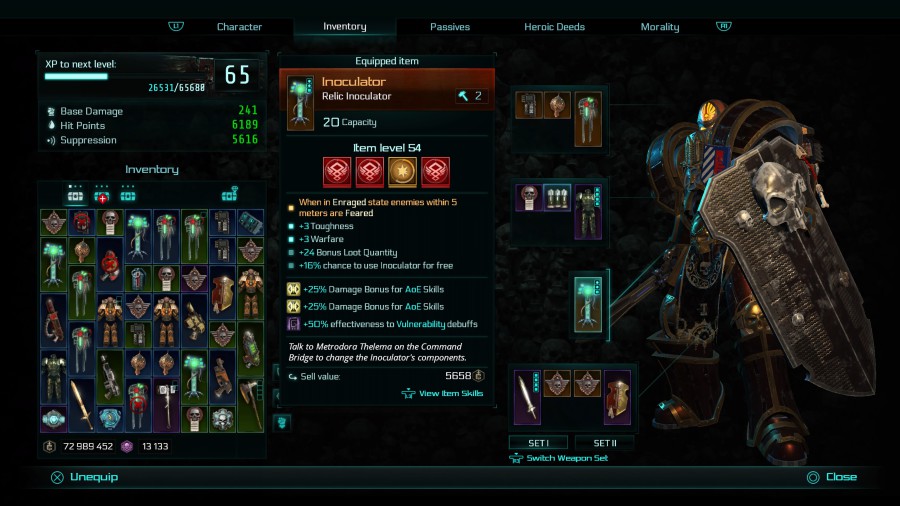 It seems the attributes (luckily) don't change and stay as they were.

Unequipping and re-equipping the Inoculator does not seem to stop this behaviour.
I invested quite some resources into getting a specific setup (however that's not the biggest issue here).
Because of the randomness every mission, this is fast becoming quite frustrating as I don't know if my charges will have any use for me or not during the next mission.

Any ideas anyone?
Am I missing something very obvious here? If so, my apologies but I'd appreciate it to be enlightened.
It might be that my tech algorhythms are tainted by chaos from slaying too many heretics.

@devs: I know you're busy with the DLC and the new season.
If at all possible, I would greatly appreciate if you could look into this though or confirm this is somehow behaviour as expected.

On a sidenote:
After finishing the season of the warp and having played this game a lot, I took a break but I'm back for more.
I'm thoroughly enjoying it and really feels great to be playing again.

This post was edited 18 days ago by Heruceva
Comment
Store Page
Share
previous post back to community page next post
9 comments
Featured comment
Newest Oldest Best
Save This Order
Set this current order state as My default.
Order Save Options
Inoculator loadout changes automatically between missions
Your Thoughts? Please login to place your opinion. Not a member yet? Register here and now!
1
Ashavald501
0 1
2 days ago
+0
0
Same problem happening to me. Too scared to turn off the game for fear it'll change.
1
Heruva
1 3
10 days ago
+0
0
Marcopolocs
Awesome,

Godlike
Marcopolocs
91 5705
11 days ago
+1
1
Daedrael
The issue was fixed in the internal build. The next-in-line console patches will address this problem in the live version.
1
Daedrael
26 77
12 days ago
+0
0
Happens to me too. Very annoying when the random pick didn't include hp regen... Got me killed many times and makes some missions nearly impossible when bad luck hits... Please fix this. PS5 version on PS5. PSN same as here, seasonal character. Thanks.
1
Staff Member

Godlike
Marcopolocs
91 5705
13 days ago
+1
1
Heruceva
I forwarded the information you shared here along with the video. Thank you!

I presume it being stable is only temporary as it could not just work without a relevant update. Please keep me updated about your experience in this regard.

It seems stable on my seasonal character now.

I'm sorry to come back to this, but the same thing is now happening to my seasonal character.
The inoculator slots as well as the components keep changing so I end up in a mission without boosters or without health regen.

This is hampering my progress, but also grinding the heroic deeds (as there's one for using a booster component 250 times).

Any chance this can be looked into?

I don't seem to have the option to edit my previous post, therefore a new reply

I have not recorded the below steps and feedback but I can if needed.

The behavior is different now I have performed the following steps:

Thought: this only happens on the equipped Inoculator then?

BUT: I notice that the component slots STILL change COLORS when quitting/restarting game or starting/quitting missions and therefore don't have the correct component types slotted.
Well, if this means my loadout is at least stable, even though the component slots still change their type, I'm happy for now.

I'll test later to see if my loadout does stay the same.
Still something to look into I think because a single stimm conponent shouldn't be able to give 40% boost and the component types shouldn't change. There might be others with the same issue too.

To provide extra feedback, I've uploaded a recording to youtube.

(My apologies for the typo in the video title... lol)

Starting the game and entering/finishing or exiting missions seems to trigger this.

Notice also how the Stimm component gives 20% one time, and 30% another time.

You can see this in the movie as I hover over the components.
I've also noticed 40% yesterday..