As Inferno Season is about to come to an end on PC, I have made a list of  the seasonal items I got, and gave comments for each one.

In general I feel that as this is the first season, the mechanisms and values of seasonal items are rather over-conservatively designed, and most of them would become less-functional after season ends.

I hope this thread would be of help for players on XBOX/PS, and provide some feedback to developers. 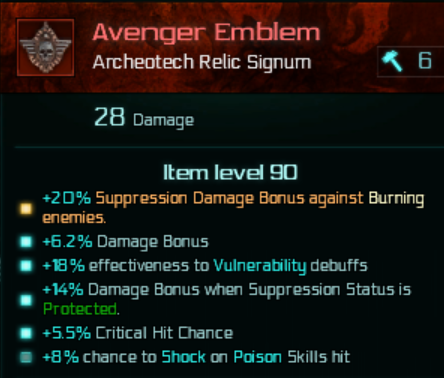 Useless in most situations, especially considering we're in a "Berserk era" —— we need signum to provide damage bonus in berserk builds. 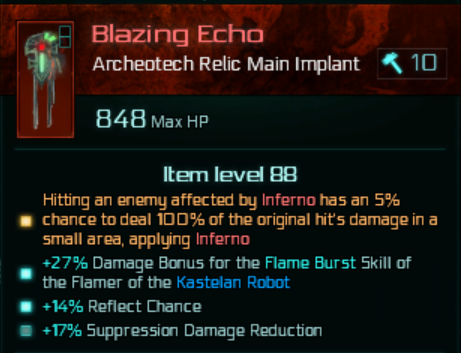 Interesting behavior, but the chance is small. It's not a stable damage output mechanism, only serves as a welcome surprise.

Perhaps fast-hitting-weapon-users would be able to better make use of this thing. 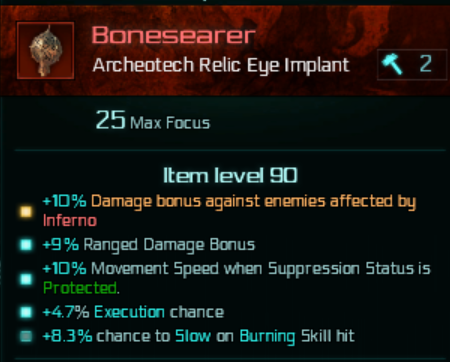 Are you kidding me lads the value is too small. I need stronger damage bonus to sear the bones of heretics. 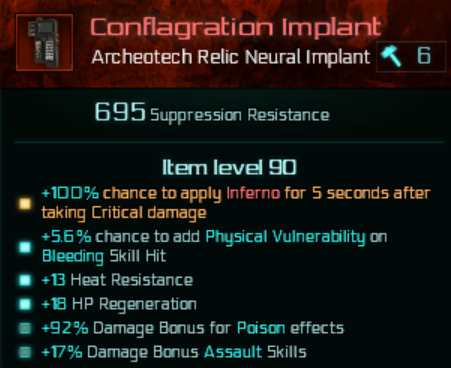 That's a little weird way to set a trigger. I'm not sure if I often get critical damage from enemies.

Still, this implant may be the only way to apply Inferno  on the enemies after season ends. 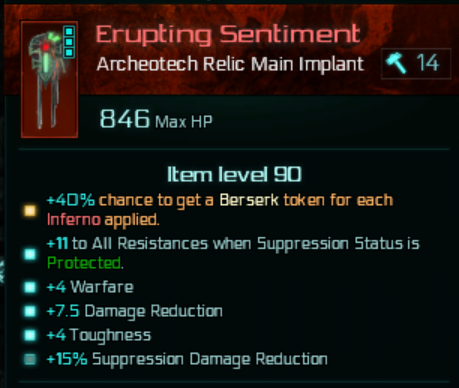 A supplementary source of beserk tokens.

But  previously I found when I use it together with other Berserk-getting mechanisms, sometimes the Berserk tokens would vanish in a sudden (not sure if this has been fixed). 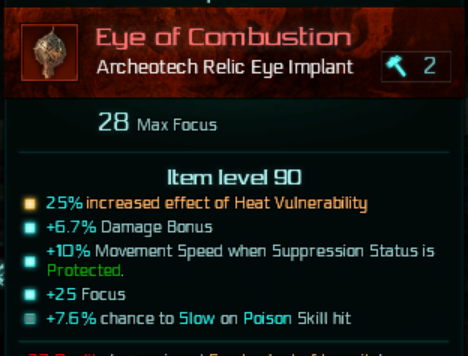 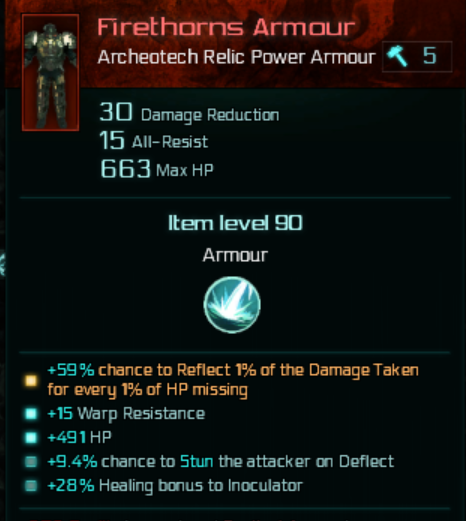 high-chance damage reflection might be useful, but I feel rosarius armor would be better. 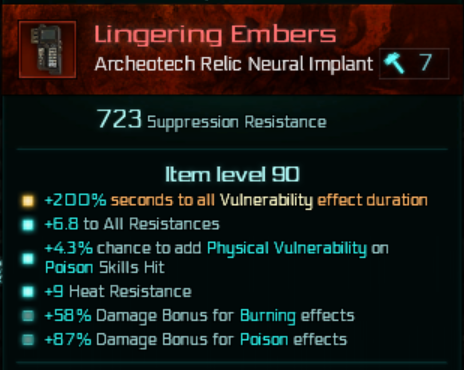 Longer vulnerability duration might be useful for slow-hitting weapon users. 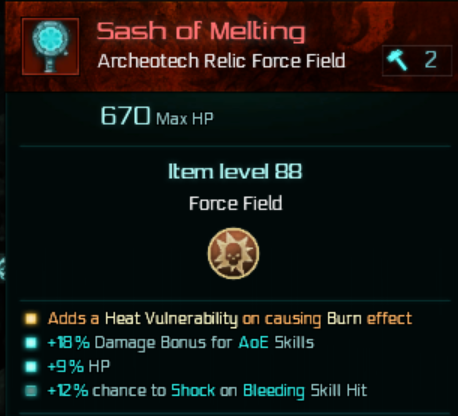 Since we cannot repeatedly apply Burn on the same enemies, I fear such enchants are never comparable with "adds vulnerability when critical hits". 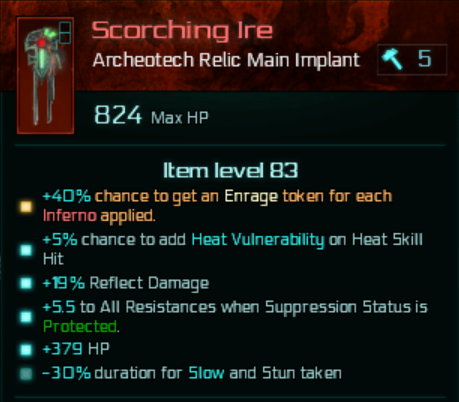 A supplementary source for enrage tokens, but note that main implant is also the source of enrage damage bonus. 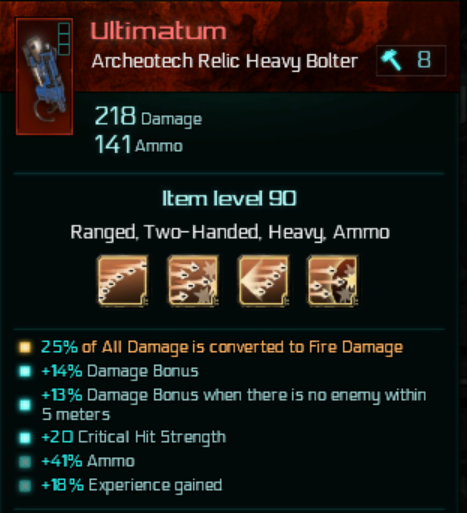 If it is not, then how would fire damage interacts with  all the heat mechanisms (like damage bonus, enemy heat resistance, etc?)

This post was edited 1 year 265 days ago by Distemper
Comment
Store Page
Share
previous post back to community page next post
4 comments
Featured comment
Newest Oldest Best
Save This Order
Set this current order state as My default.
Order Save Options
Comments and discussion about Inferno Season items
Your Thoughts? Please login to place your opinion. Not a member yet? Register here and now!
1
Brother Kundari
20 568
1 year 263 days ago
+3
3
Well, many of the items were nice and are worth taking care of and I want to hold on to those I am actually having. Wished I had more, but oh well. At least they were Seasonal items only things, so in that regard, nice just having around.

When it came to Destruction and Mayhem output of these Seasonal items, and Fire & Heat in general I discovered (a bit late unfortunately) that the overall Damage output & Combination of these items were a bit thin later on regarding Higher Lvls, and dealing with Missions with Higher Lvls (+8-10+). Which again meant if you were ever to actually do some incredibly SERIOUS Damage with Fire, you would have to delicately finetune it to the MAX.

I know I should have made a Character #2, but it was a bit late for making  that.

Now it might as well just be better to take a good break from the entire gaming for a while. And then I come back for more after Ssn #2 have been going on for a cpl weeks.

Christmas is just around the corner too. Things to arrange, things to take care of, things to make sure is ready.

1
Lankester
35 130
1 year 263 days ago
+2
2
In my case, I've never really bothered with the inferno items simply because their effect was usually weak and they would disrupt whatever build I was aiming for. The inferno items I got never presented any viable alternative. If I am going for a full DoT build, crit build, berserk build, enrage build, whatever build, there would have to be a significant incentive to skip standard items, thus lowering the effectiveness of what my build is aiming for.

For example, my TA was always using plasma guns 'of robotics' simply because the data flux advantage gave me the ability to field four Kastelans. My perks played into that too, obviously. No inferno item was going to change this decision, they simply were not good enough for me to even consider them.

I see two ways to address this:

We are thinking about bringing back the Inferno mechanism later in some way but this exists in concept only, we will see.

The damage output was indeed way too low, we realized this and the S2 items will provide much higher damage boost.

Overall,  it seems that "Conflagration Implant" and perhaps "Blazing Echo"  is needed to utilize Inferno mechanisms after season ends.

If one player doesn't have "Conflagration Implant", then items like "Blazing Echo" and "Erupting Sentiment" would be of no use then.

Perhaps more exciting rewards is needed to motivate the players in the next season. Without damaging game balance, of course...