So I've been picking up a few Archeotech Blueprints now - have one for Las-Pistol and one for Grenade Launcher - and was wondering a few things about these blueprints:

3.     If the main enchantment is static then does that mean there are multiple versions of each weapon blueprint that can be acquired? (With each one having a different Static Main enchant?)

P.S. Why don't Archeotech or even Ancient Relics have GUARANTEED sockets?

If these are the best of the best weapons one would think they would have guaranteed sockets. Pulling them (or crafting them) with zero sockets definitely takes the woohoo out of getting them; especially if your regular Relic item has sockets and an active Psalm doctrine or kicka$$ shards that makes the Archeotech or Ancient Relic look like poo.

This post was edited 30 days ago by Overtkill
Comment
Store Page
Share
previous post back to community page next post
9 comments
Featured comment
Newest Oldest Best
Save This Order
Set this current order state as My default.
Order Save Options
Archeotech Relic Blueprints Questions
Your Thoughts? Please login to place your opinion. Not a member yet? Register here and now!
1
Lankester
3 13
23 days ago
+1
1

1) Yes, on red and better gear, the main highlighted enchant is fixed, you can't change or reroll it. You will see a padlock icon next to it: 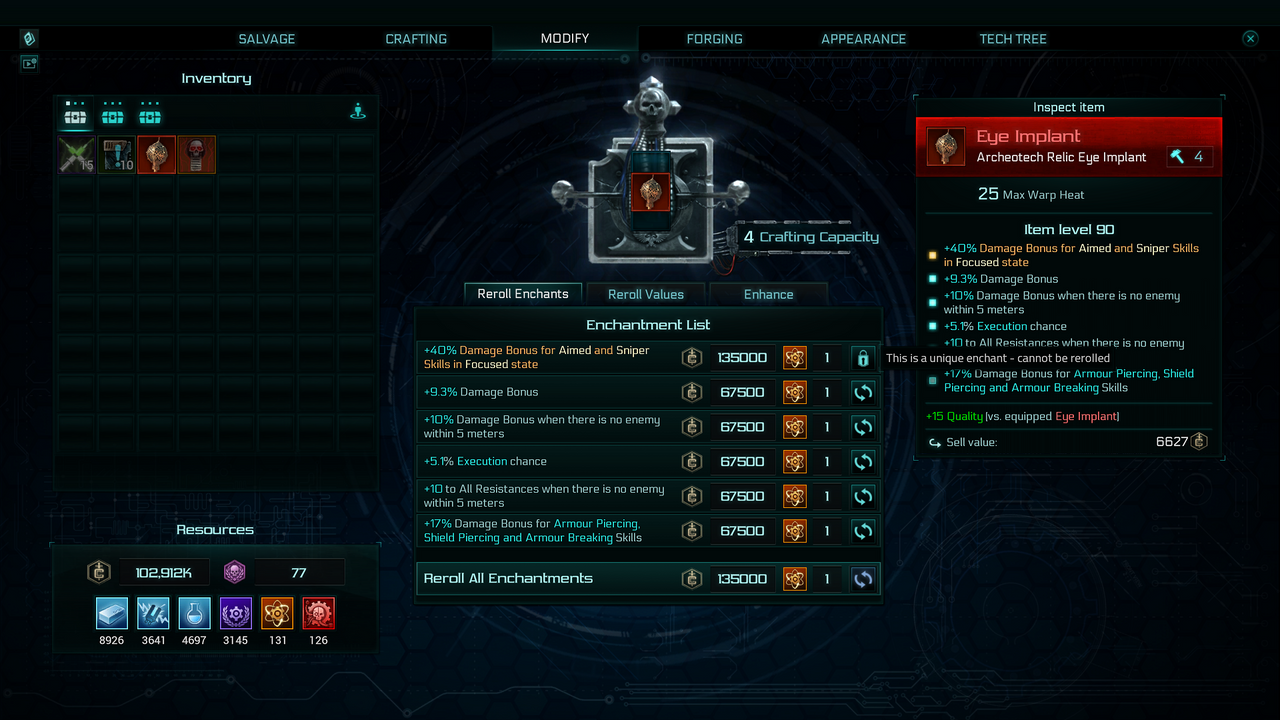 Ancient relics can't be modified at all. Their enchants and values are all linked together to support the main one. If you try modifying an ancient relic, you won't even be able to select it, it will be greyed out: 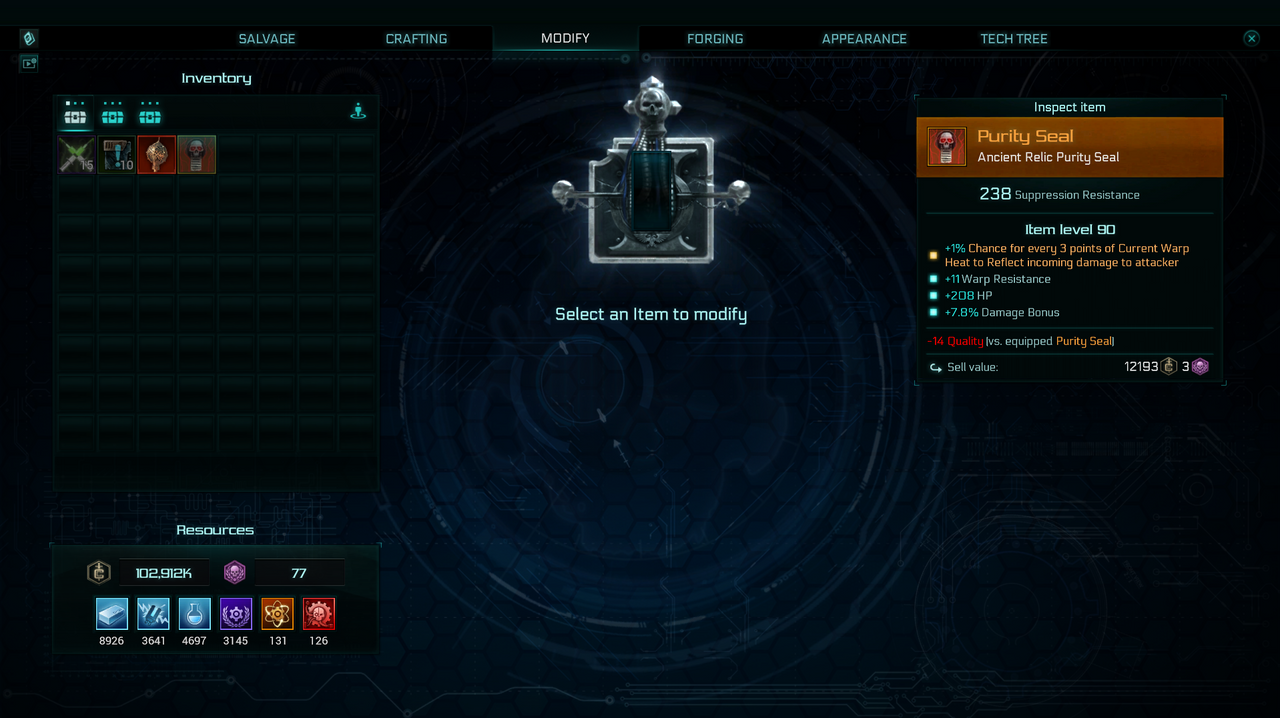 Morality relics behave the same way as archeotech ones - you can modify all stats except the main one: 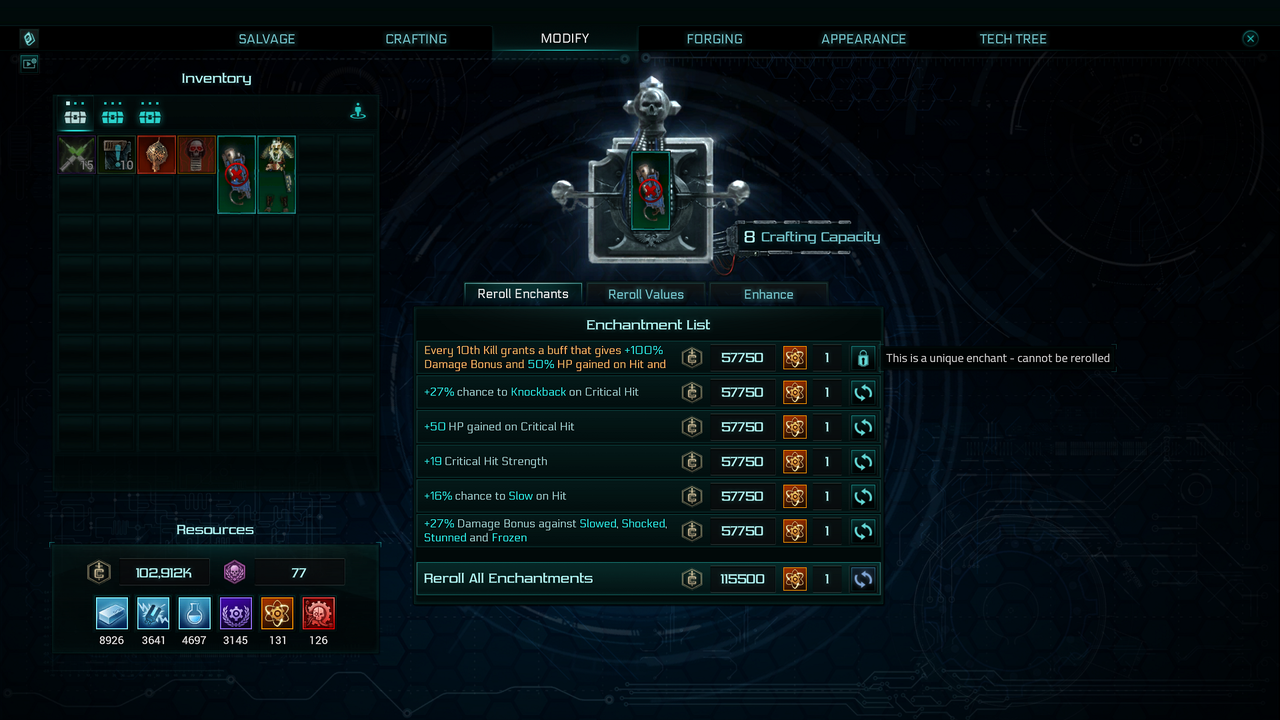 Although here I would probably poke @MARCOPOLOCS‍ to ask about the weird greyed out stat (first line) on this one - not sure if it's supposed to behave that way: 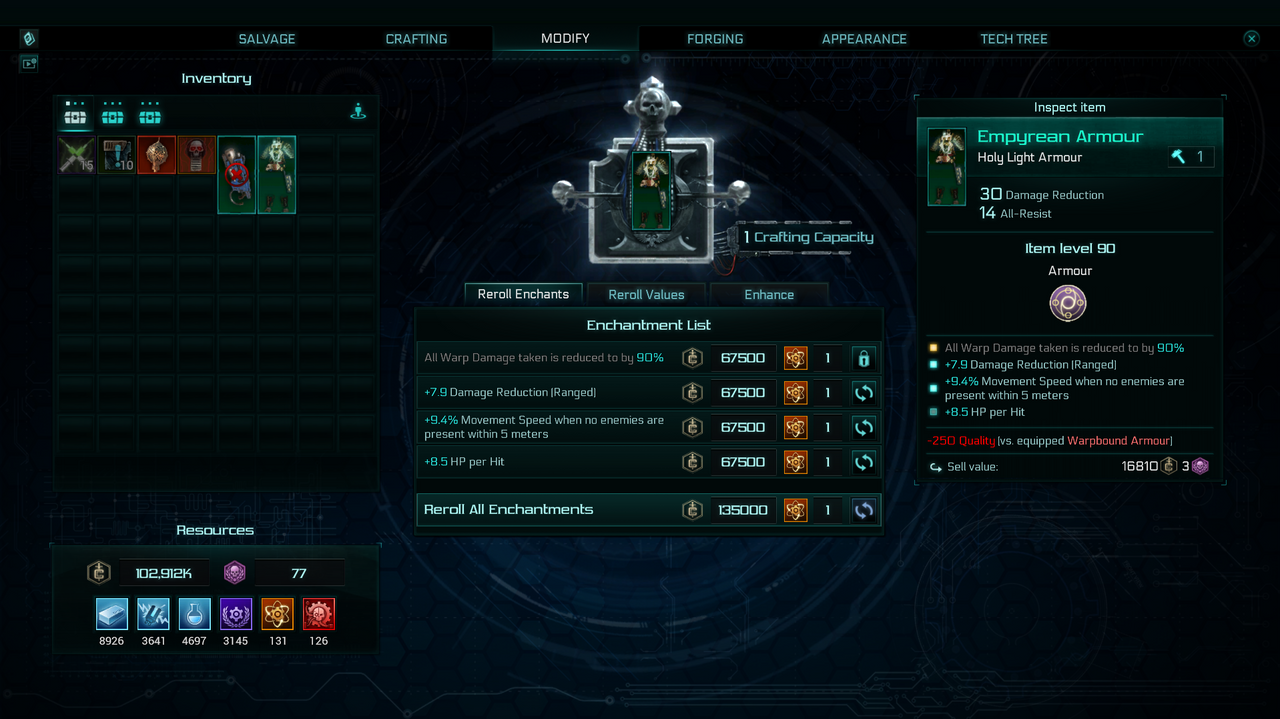 2) + 3) Yes, it will. Your blueprints can generate items with the same main enchant, but different strength. If you're after a specific enchant and want to max its strength, prepare to buy lots of the same blueprint type.

To make matters worse, with archeotech blueprints, each will generate an item with specific main enchant - you will see it listed in the crafting window after you learn the blueprint: 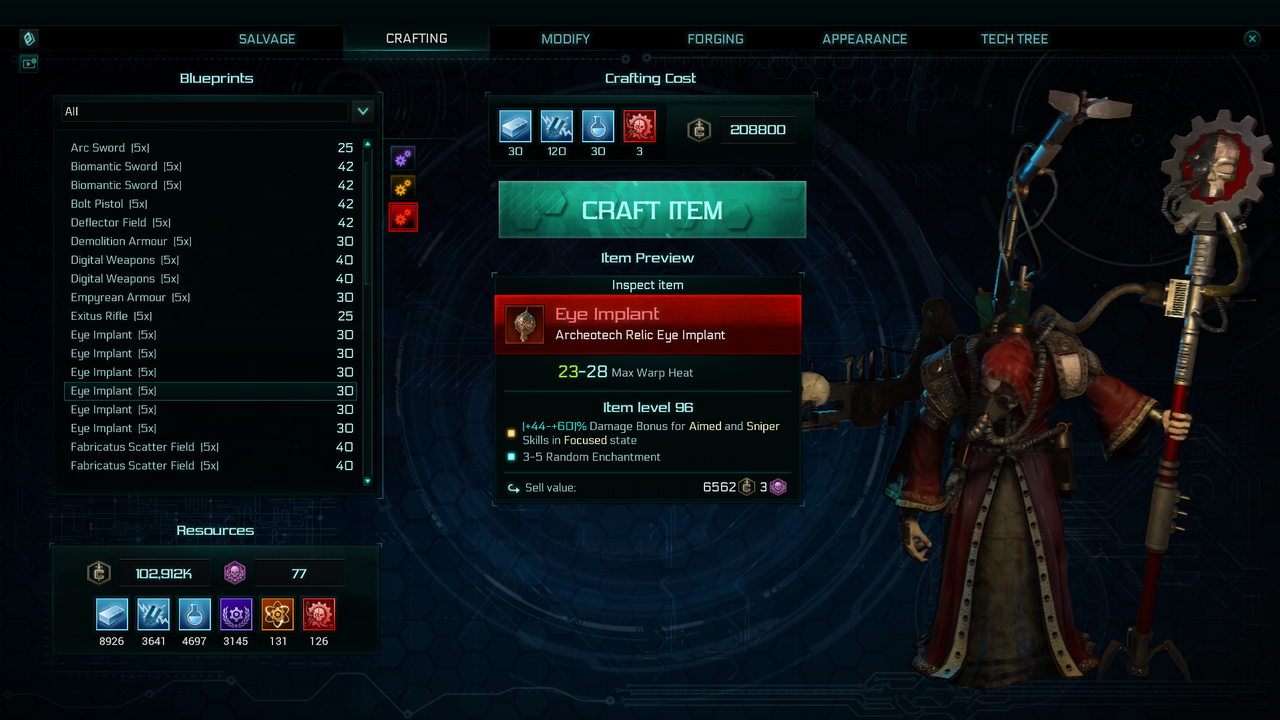 Which means you if you're really after one very specific enchant, you might have to buy many versions of the same blueprint until you get the one you want. Which could take a while, since the stores re-stock randomly...

Presumably, the order of epicness is: grey -> green -> blue -> purple -> brown -> red -> orange -> dark green (morality relic). The top quality is morality (holy / daemonforged). And no, not even morality relics come with guaranteed sockets. It's not a real problem, though, you can slap new socket on them any time you want. Just go to the forging tab in crafting (Omicron Arkh).

As for max sockets:

Courtesy of the compendium, which is a very handy guide. You should definitely check it out.

1
Overtkill
5 42
24 days ago
+0
0
Marcopolocs
I did figure out why I could not add any more sockets to my Shield - 4 is the max sockets a one-handed weapon can receive.

Yeah, I should really have looked that up.

I was successful in adding two sockets to that Inoculator - thank you Marco. (Which is an absolute BEAST btw.)

Case & Point - last night I pulled an Ancient Relic Inoculator - which, after some unlocking is turning out to be truly beastly (Main Enchant - Gain HP & Suppression on kill equal to killing blow) and it has -- zero sockets.

Don't get me wrong, it's likely going to stay on my Inquisitor - but man it would have been truly awesome to add a couple Level 5 Shards to it.

(Also - can you only add 1 socket to an item? I added one to a Suppression Shield and tried to add another but it will not let me.)

Oh and as for the Archeotech Relics  - changes to those will be most welcome.   My cache of them I was saving for salvaging may just sit for a while then.

Additionally there will be a few changes on the Archeotech weapons sometime soon which you will be most probably pleased to see!:)

And I certainly understand that for regular Relic weapons the number of sockets is governed by RNG.

But on Ancient Relics & Archeotech Relics shouldn't one or two sockets be guaranteed - in order to make these weapons truly beastly among relics?

I'm not saying you should guarantee max number of sockets but perhaps one socket guaranteed on Archeotech Relics and two sockets guaranteed on Ancient Relics. It would go a long way to distinguishing them from the regular Relics.

Regarding your 1st question: there are various pre-defined Archeotech blueprints so you can also get a new Las-pistol blueprint with another relic enchant on it.

2. The values can change only if there is a value ranged indicated in the description of the relic enchant of the blueprint.

3. I guess my first answer covered this question as well.

Well, the number of sockets depend on RNG but sockets can appear on crafted items.