Mission-breaking bug in "The Protector"

Update #1: I've found a second bug. After working around the first bug using AOE skills I got to the end of the mission but am unable to trigger the final encounter. I approach the balefire and get a brief cutscene where I'm told to light it, but am unable to do so. I've walked all around the area and don't get a button prompt to light it. I tried restarting the game and the issue persists.

Original Post: I'm experiencing a bug in the mission "The Protector" where an enemy in the first encounter spawns outside the encounter boundary (the left-most enemy in the image below). I tried moving all my characters away to lure the enemy out but they also can't cross the boundary. I tried bringing a ranged unit but they cannot target the enemy beyond the boundary. Since the enemy cannot be killed, the encounter can't end and there's no way to progress in the mission. I've tried restarting the game and loading an earlier save before starting the mission again but the issue persists. I'm playing on hard, I don't know if difficulty affects the spawns. 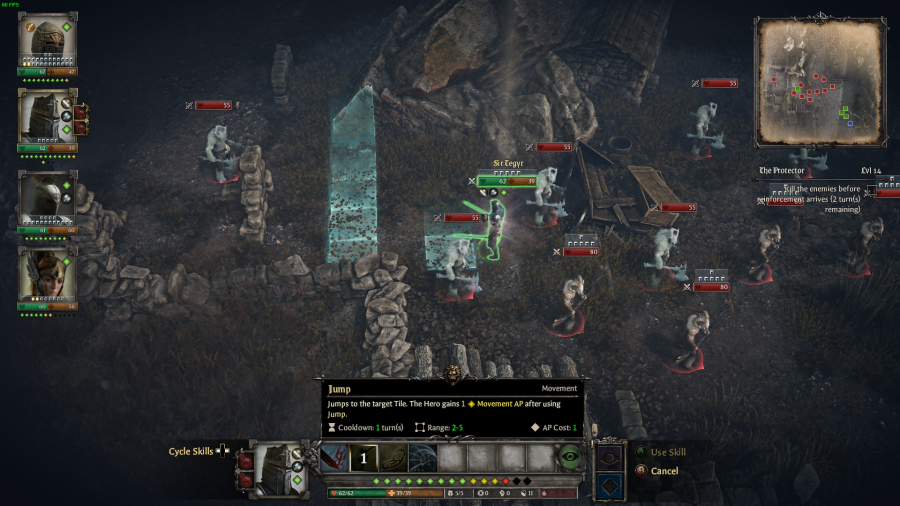 This post was edited 280 days ago by Poxopas
Comment
Share
previous post back to community page next post
1 comments
Featured comment
Mission-breaking bug in "The Protector"
Your Thoughts? Please login to place your opinion. Not a member yet? Register here and now!
1
Poxopas
1 1
282 days ago
+0
0
Found a work-around for now, the enemy can be damaged with AOE skills if the AOE reaches past the boundary tiles (Fire Blast and Earth Shaker worked for me).