Lasgun is too good in PvE

I love the Lasgun. Always have. That being said, there are 2 problems as I see it, but first a small context for the issues.

The 4th skill of the Lasgun, "Hot Shoot" is heavily open to abuse/exploit gaming.

For those not familiar with the skill of this gun here is a picture with stats, on the gun I use: 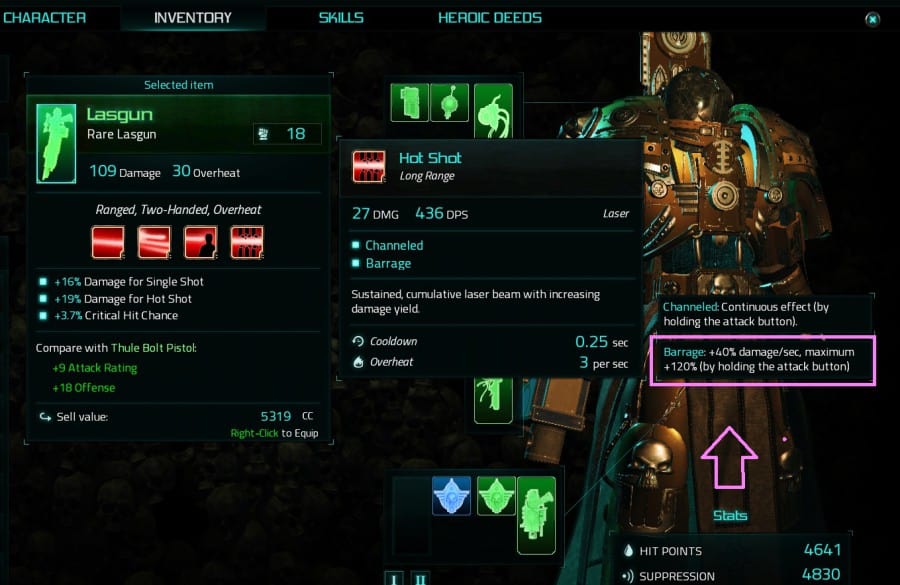 The damage numbers in themselves could be said to be very good, but nothing that needs attention. But the high damage is just a "bonus" compered to the two main issues.

Issue 1. It fires in a straight line hitting every enemy, but ignores ALL terrain. Yes you can stand behind that big indestructable statue and kill everything from dreadnought to Titans because they will fire into said obstruction. Even there missile, (indicated by a red circle on the ground). I do not think further elaboration on how to exploit this is needed, but I have made my case on point 1.

Issue 2. The range. It has a longer range then, for example, traitor marines (Chaos Marines) have aggro range. Basically you can just stand and kill then without...anything really.

So Hot Shoot has high damage, fires through everything and has a longer range then enemies have aggro-range. I hope this was help information. If it has already been mentioned I apologize for beating the dead horse, I love the game so far and really want it to be great AND balanced.

I wrote this in good conciences expecting not to abuse this, until it is resolved if working as intended, being modified as I type, or simply something to be mended.

This post was edited 5 years 224 days ago by Vlricus von Kronstadt
Comment
Store Page
Share
previous post back to community page next post
1 comments
Featured comment
Lasgun is too good in PvE
Your Thoughts? Please login to place your opinion. Not a member yet? Register here and now!
1
Insane Cheese
0 7
5 years 223 days ago
+1
1

Sounds like it ignoring Terrain is a bug.  As for the range, I'm sure they'll tone it down.