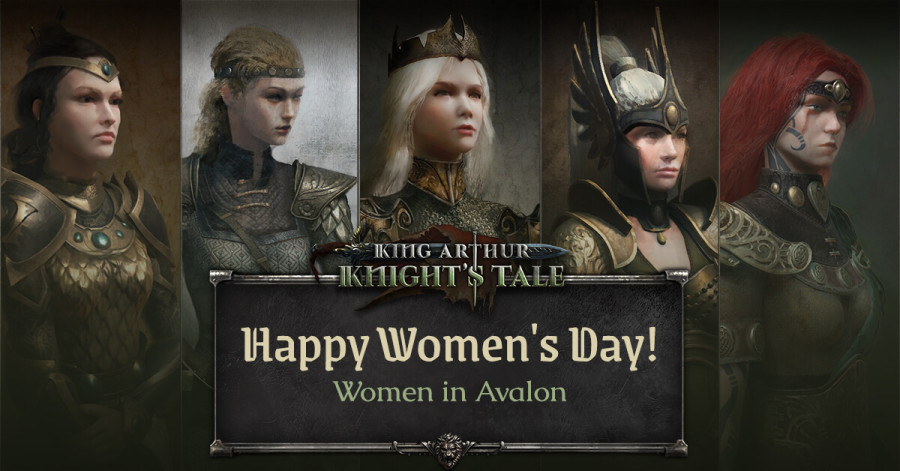 This might be an excellent day to highlight some of the female heroes in King Arthur: Knight's Tale. You might know these characters from the broader Arthurian myth - these names appear in very early texts like Le Morte Darthur or The Mabinogion, and these figures had their own changes and stories in later centuries. This diverse cast of the myth is still inspiring writers and artist to this day (Routeledge has an excellent anthology titled Women of the Arthurian Legend, for example).

Our version of these heroines take inspiration from the core legends, but Avalon's corruption works in mysterious ways, so you might meet some of them in a form that you might not immediately recognize.

Note: We will try not to spoil major plot twists, so we'll focus only on a few selected heroes for now. That said, even this small text might be considered a minor spoiler. With that in mind, here are some of the female characters you can meet on your journeys in Avalon.

You might know Lady Dindraine as Sir Percivale's sister, but she is a brave and skillful warrior who was overshadowed by his brother’s fame in Britannia, where she was going questing with a band of knights and died a tragic, heroic death – only to reborn in Avalon as a skillful fighter with a grim determination that she would not rely on anybody else for protection anymore. As a devoted Christian, she decided to forge her own path as one of the brave souls who spend their lives searching for the Holy Grail – as in this strange otherworld of chivalry the Grail is the ultimate object of power that nobody could locate so far. Lady Dindraine is an exceptional archer in the game.

Lady Isolde is a Sage in Knight's Tale - back in Britannia, she was a beautiful princess who met Sir Tristan when the young knight was tasked to bring her back to the King of Cornwall. Due to a love potion they both consumed by mistake, the couple fell madly in love and their fateful meeting eventually led to a series of lies, conflicts among knights and lord and eventually their death. After the turmoil of their tragic love affair, Isolde found peace in Avalon where she became one of the shrine maidens and enchantresses of the Lady of the Lake, a warrior-priestess enacting rituals and defending the Lady’s sacred places on the island. She renounced her former life and claimed to have forgotten Sir Tristan.

Lady Morgawse is the former Witch Queen of Orkney – back in the glorious days of Britannia she was the sovereign of the cold northern islands, first expanding her rule into the Highlands, then taking over the savage Pict tribes. The Picts were descendants of an ancient, noble race that used to deal in pacts with otherworldly entities, first the Sidhe, then the Fomorians and later, after slipping into depravity, with unspeakable abominations that stir blindly in the depths of the Earth. The toll of her death was high on Morgawse, who lost her great kingdom, most of her powers and most of her sanity. She hates King Arthur and her only desire is to find the Once and Future King again here in Avalon - to kill him again, this time properly.

Lady Guinevere was once the Queen of Britannia and her beauty was praised by the troubadours all over the realm. However, those who came to the court of Camelot expecting to see a fair-haired queen sitting politely in her stunning attire were surprised by her wits and her steely resolve. Everyone agreed that her intellect, charisma and warrior-like attitude made her the perfect companion of the Once and Future King and it was not entirely surprising that some of the greatest knights of the Round Table secretly - or not so secretly - fell madly in love with her. “An otherworldly queen” was the expression most often thrown around regarding Guinevere and ironically almost nobody knew how fitting that description was. In Avalon, she became a wandering arcanist, in search for knowledge and secrets. To her horror, she also discovered that the Grail Aspect has changed her in more ways than she could have imagined. In Avalon dying used to be temporary, but became permanent since the Storm – still, she could be killed but she cannot die any more.

Morgana le Fay is an extremely powerful enchantress. As King Arthur’s half-sister, she had her fair share of vicious feuds with Arthur when she claimed the throne of Britannia for herself several times – this, understandably, led to various legend-worthy clashes between Morgana and the knights of the Round Table. Morgana arrived to Avalon where she found her proper place, or so it seemed. She took great pleasure in her new role as the First Enchantress in the service of the Lady of the Lake. However, as she slowly became indispensable and adept in the ways of the mystic island, she felt the lure of greatness again. She knew what she was capable of here, in the otherworld, where she could fully embrace her ancestry, without any restraints posed by the material world of Britannia.

And what about one of the central figures of the story, the Lady of the Lake? This powerful, enigmatic and elusive presence will play a key role in the unfolding of the story... which you should really discover for yourself when King Arthur: Knight's Tale launches.

An Early Access version featuring the first act is available now on Steam!