Same buff for at least three weeks in a row

I'm assuming this is a bug. But then, it could just be RNG... And it's not terrible. Just want to make sure you know about it.

Anyway, on PC, I've have Boon of the Ecclesiarchy, had the same the previous week, and it says that'll be the buff for next week too. I could be wrong, but I assumed it was something that changed from week to week. 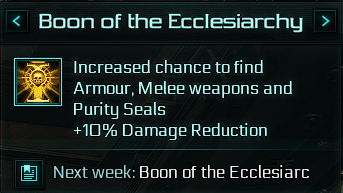 Comment
Store Page
Share
previous post back to community page next post
1 comments
Featured comment
Same buff for at least three weeks in a row
Your Thoughts? Please login to place your opinion. Not a member yet? Register here and now!
1
stugis88
4 17
2 years 179 days ago
+3
3
It's not a bug: it's the result of the Planetary Reclamation event that ended three weeks ago, the buff will override the regular ones for another week iirc and then the usual cycle should start again.