With the arrival of the Season of the Void Brethren comes another balance package of greater volume, this one focusing on the Tech-Adept class. The list of changes are too long to be discussed here in detail, but other more significant ones are going to be covered in the guide below. To make things easier, we prepared an example build for you to try - and adjust on the run, of course. Have fun!

Construct weapon items are gone as we knew them, replaced by a simple resource-based upgrade system. Two module types have been removed which means less inventory management, but a larger pool of Godlike enchants on the remaining modules compensates. Weapon items’ powerful Godlike enchants like “Electric arcs on melee hit” or “Chance to trigger a Fabricator Scatter Field” are now available in two main enchant-pools (defensive and offensive) on Construct modules instead.

Another substantial change is the complete renewal of the class-specific passive trees of the Tech-Adept. You’re no longer required to spend passive points to unlock construct weapons (they come by reaching a fairly low level requirement), but certain skills which affect construct behavior (like charging, or extra AoE attacks) still remain optional and can be specialized towards. There are more passives to choose from, more ultimate passives to reach and a new requirement system in work: instead of following certain paths of passives, you only have to reach a set number of minor passives to be able to choose ultimate passives from the tree.

Here is the first of many build variants we think are viable at higher levels.

This kit is based on the new turret-arrive mechanism – this does AoE damage, slows/knocks down, and receives bonuses from any affix with physical or AoE bonus. Combining its effect with the new unlockable passive ability “Inextinguishable Promethium” (which gives Tarantula Flamer’s attack a Flee tag) grants you the tools to keep all enemies under constant crowd control.

Starting on a map you can basically set up any Alpha weapon to use its extra slot to summon your Kataphron Destroyer, then immediately switch to your secondary set, a Voltaic Axe Beta from where you can summon the rest: 3 Flamer Turrets and a Gamma Turret. 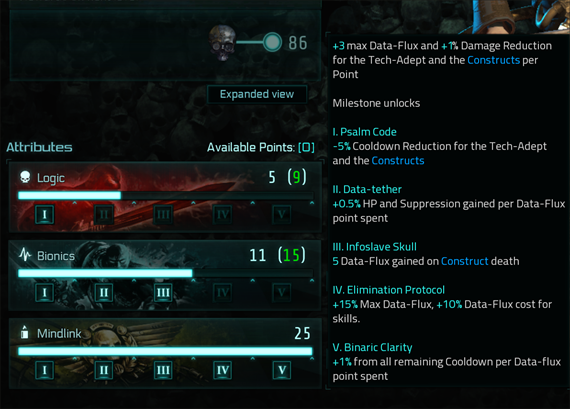 This post was edited 331 days ago by patrikNeocore
Comment
Store Page
Share
previous post back to community page next post
4 comments
Featured comment
Newest Oldest Best
Save This Order
Set this current order state as My default.
Order Save Options
Tech-Adept Deep Dive - Example Build I.
Your Thoughts? Please login to place your opinion. Not a member yet? Register here and now!
1
Staff Member

No,  if you switch weapons then it won't remain active.

Hello, I'm curious why you decided on also using a Kataphron Destroyer? It can use a flamer so I understand the synergy aspect of it. Anyway, this is a cool build and I'm going to try it out. I was avoiding flamer on Turrets because of its weakness against armored. But I suppose if you increased the dmg enough then it would make up for the -30%. Also, I thought about leaving out one of the Dataflux regen perks and substituting it with Omniscient Constructs.

Very nice to see detailed explanation in mechanisms from staff！

If I'm understanding it correctly......

Like, if I summon some flame turrets and kataphron servitors with an alpha weapon with this doctrine , the heat damage bonus will always be there, even if I switch to another weapon without that doctrine?

Please confirm if you saw my comment. This is quite important, and is perhaps unknown to many players :)