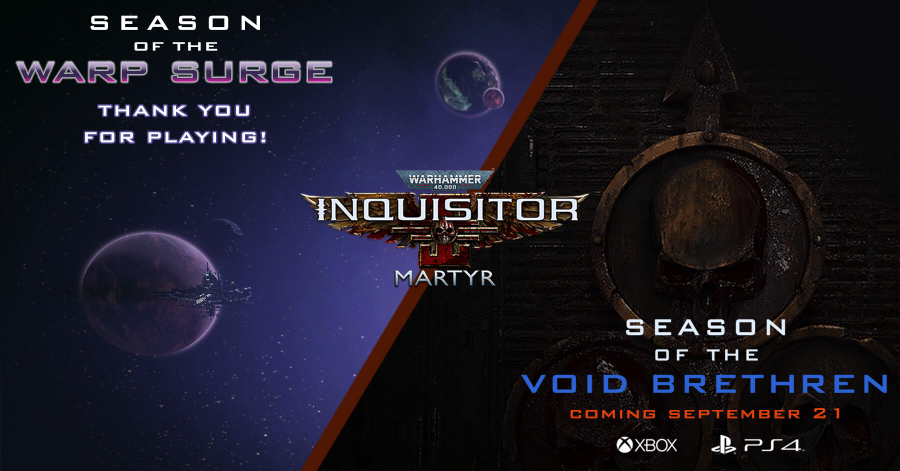 the time has come to draw the curtains on Season of the Warp Surge on both PS4 and XboxOne. However, every end is a new beginning as well. We are pleased to announce the arrival of Inquisitor's 3rd Season - Season of the Void Brethren - to consoles on the 21st of September. In preparation for Season 3, every player's Seasonal achievements, characters and resources will be merged with their non-seasonal account today, which is why an extended maintenance will take place from 11 AM (CET).

Those players, who joined the ranks of Inquisitors, might not be fully aware how the merge process will take place so we summed up all the details below which is a common practice at the end of every Season.

Seasonal characters will simply become non-seasonal, regular characters, so you will be able to keep playing them. The items you have on your characters, stash, and inventory will be also transferred over to non-season. Seasonal items with special names and enchants will remain - you might find some use to their special enchants during upcoming events!

There are several Seasonal mechanics tied to the Seasonal Journey and the Objectives in it - those rewards tied to the Journey will not be carried over, such as the Store discount bonuses. However, the remaining Warpsurge Shards that your character might have, albeit not dropping anymore (you can still forge them), will be carried through into non-season.

Currencies like Favor, Credits, and Fate will be simply merged into non-season. It is time to buy all that extra stuff with the goods you have earned! Crafting materials such as Sparks of Glory will be merged as well. Speaking of crafting, your blueprint charges on Seasonal characters should add up to your non-seasonal charges, up to the allowed maximum. All your unlocked blueprints, and Inoculator unlocks should be carried over safely as well.

Aside from items and crafting, Campaign and assignment progress is going to be carried over as well, of course, along with Ordo and Influence unlocks. Your Heroic Deeds that you have unlocked on your Seasonal Inquisitor should now be unlocked on your regular characters. Heroic Deed progress should be carried over and added to your existing progress, so you may get some additional unlocks!

Tarot Card progress should work in a bit different way: The player will receive tarot cards equaling the amount spent on upgrades during the Season. Tarot Seals will simply be carried over and merged into non-Season.

Your active missions on your characters should remain so, such as Intels and Void Crusades.

When this all happens,  as mentioned above, there will be a longer maintenance period so we can ensure that everything is transferred over correctly.

The end of Inquisitor's 2nd Season is only a tiny fraction of what is coming out today. A new update gets released which introduces the long-awaited Co-Op Void Crusades among other, frequently requested features such as the Loot Auto Pickup filter and the Tarot Card removal option. Those, who favor the Tech-Adept will be pleasantly surprised as our team balanced out Inquisitor's summoner class to a great extent. The full patch-notes can be read below.

Various perks have been moved around from and into being Heroic deed unlocks. (Previously <->Currently)

Its behavior was changed to:

Note: This change was necessary because this item worked like a reflect item, but technically wasn't one and thus it had no synergy with any other reflect related effect.

the maintenance has ended on both PS4 and XboxOne and all Seasonal contents have been merged into the non-Seasonal accounts. Please make sure that you check all your characters and items to see if everything is in order. Let us know in the tech-issues-tips channel or in a PM if you experience any abnormality.

Thanks for your patience in the last few hours.

Newest Oldest Best
Save This Order
Set this current order state as My default.
Order Save Options
[PS4/XboxOne] Content Update and Seasonal Closure | September 9
Your Thoughts? Please login to place your opinion. Not a member yet? Register here and now!
1
DEECH21
0 4
247 days ago
+1
1
Marcopolocs
Yes, online co-op is working again. Thank you.
1
Staff Member

Godlike
Marcopolocs
67 5272
254 days ago
+1
1
Cerberus Hades
@DEECH21‍ @N0DNARB‍ the server-related issue got fixed and the Co-Op should run again properly on your end. It works on our side since the fixes. Please let us know in a reply if you still experience any technical problem.

Our apologize for the caused troubles.

but other seem to be certain people that can host games,

Keep up the good work, Marines!

1
Stonegolem
1 7
258 days ago
+0
0
We want a proper PS5 upgrade with stable 4K @60 fps and increased graphics fidelity.
1
picm3rolli4
0 1
258 days ago
+0
0
Marcopolocs
Well, after installing the new patch on PS5 I lost all my weekly glory points, I guess I will leave the game until the 25th - when something new is scheduled to happen. Cheers
1
Staff Member

the maintenance has ended on both PS4 and XboxOne and all Seasonal contents have been merged into the non-Seasonal accounts. Please make sure that you check all your characters and items to see if everything is in order. Let us know in the tech-issues-tips channel or in a PM if you experience any abnormality.

Thanks for your patience in the last few hours.