The command bridge will not load. Since I updated my game, the command bridge is just a black screen behind all the notification boxes and the buttons at the bottom that switch to various things (character, glory, missions, etc). I've launched the game three times and loaded both of my characters multiple times, the bug won't go away. Everything that does not involve the command bridge area and the characters there is fine; I'm even able to play missions. 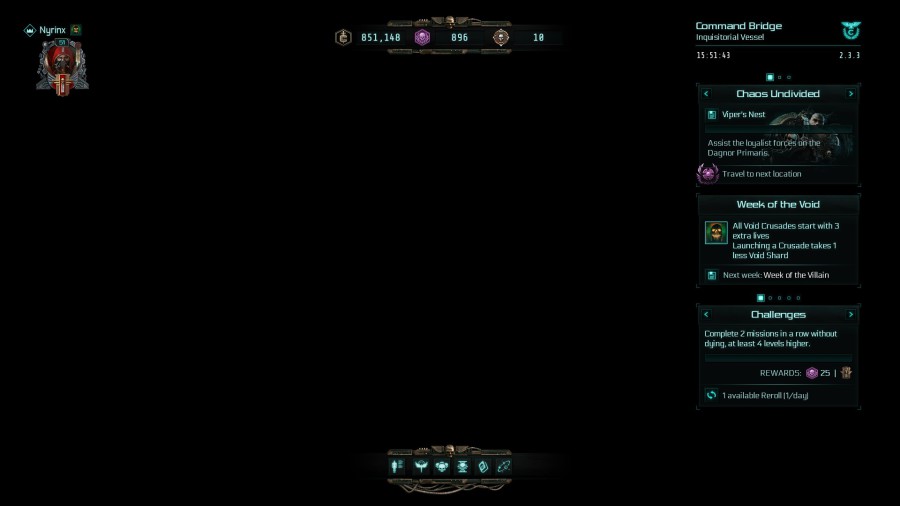 This post was edited 50 days ago by Nyrinx
Comment
Store Page
Share
previous post back to community page next post
4 comments
Featured comment
Newest Oldest Best
Save This Order
Set this current order state as My default.
Order Save Options
(PC) Command bridge is gone
Your Thoughts? Please login to place your opinion. Not a member yet? Register here and now!
1
Nyrinx
1 2
44 days ago
+2
2
Marcopolocs
I verified the integrity and found two file errors. After fixing them, the command bridge loads in and everything in the area works fine.

Godlike
Marcopolocs
31 4317
46 days ago
+0
0
Nyrinx
Thank you for the screenshot, the issue got forwarded to our developers, however in the meantime please verify the game's integrity in Steam at least 2 times in a row so we can exclude the possibility of a broken file caused by the new update.
1
Nyrinx
1 2
50 days ago
+0
0
Marcopolocs

I currently have 2 characters. I do not remember making a third. This bug appears for both characters.

I have edited the original post to include a screenshot. Everything you see is interactable, but the command bridge and everything in it does not appear.

Additionally if possible please attach a screenshot to your original post, it would help us a lot. Thank you in advance!