Enemies of the Imperium have established many hideouts across the subsector in an attempt to avoid righteous prosecution. A               special purpose intelligence unit has gathered significant data on these cowardly scum.They shall not avoid their just punishment much longer. The relevant information shall now be disseminated through secure channels to all Throne Agents. The Conclave expects every opportunity to eradicate the hiding vermin be taken.

Hidden rooms on interior maps will appear far more often than usual. Find as many as you can and eliminate enemies found in them. Event rewards at the end are based on the number of hidden rooms cleared. 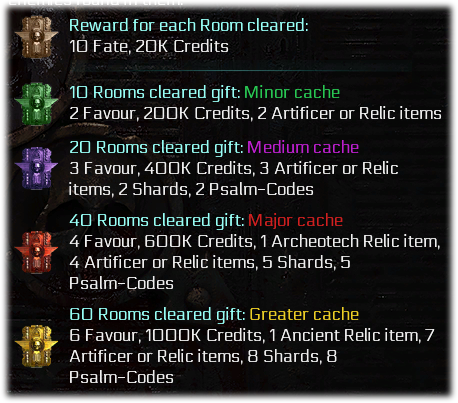 Gather 5 Ecru Shards to open the brand new Ecru Crusade and complete its challenging missions to receive epic rewards! Fight and defeat the Alpha Legion, Tyranids, and the Aeldari to collect your righteous bounty.

From now on Cortex Fragments can be looted from Villains, Elites, and Commanders. After collecting 100 of them you can exchange them for Favour at Custodian Rebus. The maximum amount of fragments you can gather is 200 per week. Favour then can be exchanged for valuable items at Custodian Rebus’s store.

This post was edited 1 year 206 days ago by Marcopolocs
Comment
Store Page
Share
previous post back to community page next post
17 comments
Featured comment
Newest Oldest Best
Save This Order
Set this current order state as My default.
Order Save Options
Content Update for Inquisitor - 2.2.1 - Jan 30
Your Thoughts? Please login to place your opinion. Not a member yet? Register here and now!
1
DarkInquisitor
19 26
1 year 223 days ago
+0
0

However, that remains a lot of time, not even saying that beyond the Rebus shop where I was finally able to buy the Inquisition Banner*, all the random rewards I got where all less interesting than what I already have (= dismantled ).

*very nice but a bit too high maybe, for those close to the windows... and I really wish I could hide/display the whole HUD with one button to make screenshots ... or maybe use NVidia Ansel like in The Surge 2.

Update 2: For various objectives, I played more on planets and I correct my first impression as, even if it looks more rare than inside ships, I had hidden rooms on surface and "high roofs". Which means only open areas never have hidden rooms for now, which is more logical. Sorry for the wrong feeling I had until now.

1
DarkInquisitor
19 26
1 year 228 days ago
+1
1
Marcopolocs
I did not buy it yet, but the only Helmet you have from Custodian Rebus is not previewed (I will add a screenshot later if you need one). However, to be honest, all the helmets are too big on my Assassin. It makes her Head HUGE in "Extra" menu (when previewing what it looks like). In other words, I prefer to keep the default helmet of my armor instead of using one from the "Extras" or Rebus.

About the Hidden Rooms, yes I found some, time to time, but I still think it requests a lot of time to reach 60 (I am 21 now). Maybe this is what you had in mind, but maybe for the next time, you can track how many players reached 60 and how long in hours that means, maybe I am wrong and this is fine, or maybe lower the cap should be more rewarding.

Godlike
Marcopolocs
50 4914
1 year 228 days ago
+0
0
DarkInquisitor
Which helmets could not be equipped by your Assassin?

The matchmaking is under some testing now, we will see how we can introduce new positive changes.
I cannot promise purple but I will have a discussion over it with my colleagues!

The footprints videos on the other hand will not likely to change in the short run, though this will also at least be considered!
We are glad to hear you started to find more hidden rooms!

- Could we have more colors (purple ^^) for the frames? I am not into blue/yellow/red.

- The Helmets is not displayed on my Assassin. Is that a bug?

- Is there any plan to really improve the matchmaking with random players? I hardly find people when trying to play coop mission (and do not intend to add "unknown friends"). All shooters allow that but here, this is beyond insanity to find someone just to play one or two missions.

Anyway, I appreciate that you don't give up on this game and continue to add content. Thanks.

This comment was edited 1 year 230 days ago by DarkInquisitor
1
DarkInquisitor
19 26
1 year 232 days ago
+1
1
OK. After one week testing the "Hidden Rooms" systems, playing as a regular pace (which means sometimes 5 missions, sometimes 10 or a bit more as I play other games), I think I cannot make it to the "60 rooms find" reward. For now, I don't even have 10 because this system is too restrictive in my case.

- I never found any Hidden Room on planets (open areas), so I guess there do not exist here.

- You are never sure a mission will include a hidden room... sometimes I played 3-4 missions without having a single one.

- As you have also Cabal objectives, those might not fit the maps you need to have a Hidden Room.

As said, this system requests too much time for me (or I am cursed and really unlucky), and I am not even sure that I can reach 40 rooms in the next 20 days.

Godlike
Marcopolocs
50 4914
1 year 235 days ago
+0
0
Zenislav
We will re-check this issue and if its not yet working (especially with the Prophecy patch) then we will do our best to include the fixes in the next-in-line patch.
1
Staff Member

First the Prophecy patch will arrive but our team is working on the next patch already but as the certification's length cannot be estimated we cannot yet tell when it will arrive. March is our goal though.

1
shantakus
0 3
1 year 240 days ago
+0
0
Megapull
Ok, so I suggest making lives common like they are in any coop, but increase the number of lives for coop crusade.To enter the void crusade every party member has to have the required number of shards and when the crusade is started all members lose the needed amount.

Make possible to have few active crusades at same time and make it like so that when a party of, lets say a party of 4 members, starts a crusade that party gets an ID number and its own crusade which remembers progres for that party only (meaning it cannot be continued unless all the party members are in group). You need to make it in database so the party/crusade ID is saved along with the party members IDs and is checked every time that a party wants to continue (make a menu where you select which crusade you want to continue, then you have to have a check before continuing if that party is the one that can continue). There has to be a mechanic for abandoning (1 player leaves, but 3 others stay in base and can continue) crusade or canceling it (not sure if this is needed if everyone can leave on their own). I can do details on this later if you want but it's similar.

I don't know if I covered everything... Please feel free to ask further...

1
OculusObscuritas
3 7
1 year 240 days ago
+1
1
Megapull
Can we expect at some time a Tarot Card, that changes the mission lvl to my current lvl? Since I am lvl 94, I can only boost missions to a lvl of 92. And this will be a problem with random star map missions, if I even get higher in my lvl to the road of 100.
1
Skydance
19 43
1 year 240 days ago
+0
0
Posted by Megapull 1 year 240 days ago
Coop mechanics for void crusades are definitely in our plans but to accomplish that is way harder than it seems. Take death count and extra lives for example - what if someone wastes all his deaths, will he block team progress or be locked out from the crusade? Shard deduction, generation, and unlocks are also problems that we need to find balanced solutions for.

Having that said, I really want to accomplish all this, so stay tuned ^^

Aimbot
Megapull
110 862
1 year 240 days ago
+1
1
shantakus
Coop mechanics for void crusades are definitely in our plans but to accomplish that is way harder than it seems. Take death count and extra lives for example - what if someone wastes all his deaths, will he block team progress or be locked out from the crusade? Shard deduction, generation, and unlocks are also problems that we need to find balanced solutions for.

Having that said, I really want to accomplish all this, so stay tuned ^^