Unfortunately the game is unplayable right now from my system, I will try my best to describe the issue so you can find solutions for people in the same situation.

Let me know if any system specs are required above these:

1. MAJOR: Can't play the game from the Burial Mounds, the game always crashes on that level (I could play through the Tutorial and 1st story mission, also Vortigern Castle), but at this map the game crashes so I can't proceed. I tried driver update, DDU and then reisntall, game reinstall, the issue still is there. Also tried with minimal, mid and high settings, nothing helps. I always let the crash report to be sent. However sometimes even the Radeon Software crash window shows up as well, as if the game was crashing the driver itself, maybe AMD optimisation issue? Is Nvidia prefered for the game? The crash may appear after the first fight or after the second but it comes randomly, first it lags for a sec then black screen/frozen screen sometimes with the music and effects still in the background it seems it still plays can click and hear steps.

GPU utilisation: 99% but it is for all the other levels all the time, bit harsh if you ask me 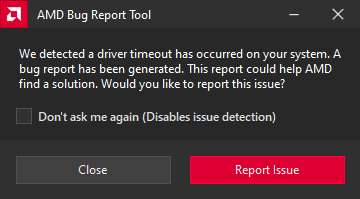 2. MID: After reinstall and driver reinstall, noticed a flicker which can be lowered but still present if adaptive sync is off. Sometimes it goes away fully but reappears when the camera moves.

3. MINOR: I've noticed after watching gameplays that on levels with dry leaves on the ground they should be animated and "dragged" by the character movement and fly in the air, but with my set-up, which should b more than capable to handle such effect the leaves are flat on the ground. Is this feature only available for Nvidia users and isn't optimised for AMD?

I will be eagerly waiting for updates and patches since the game shows great promise and it is even more appealing since it comes from fellow Hungarians from the neighborhood :)

This post was edited 1 year 107 days ago by PaininDS
Comment
Share
previous post back to community page next post
2 comments
Featured comment
Newest Oldest Best
Save This Order
Set this current order state as My default.
Order Save Options
BLOCKER BUG - CRASH
Your Thoughts? Please login to place your opinion. Not a member yet? Register here and now!
1
Staff Member

Godlike
Marcopolocs
73 5293
1 year 18 days ago
+0
0
The Burial Grounds mission got removed with our latest update but we would like to inquire whether you experience any similar issue in the current version. Please let us know in the comment section if you do.
1
Staff Member

thanks for the really detailed report. I will consult with our devs over the crash report problem and will get back to you here shortly.